Anyone can be heroic from time to time,
But a gentleman is essential all the time.

Being a gentleman never goes out of style, and in a New York Fashion Week (NYFW and NYFWM) filled with streetstyles, sportswear and heroic athleisure for multi-faceted guys, here was a refreshing reminder of super-luxurious sartorialism. For Hickey Freeman debuted tailored suits and winterwear in his delicious collection called Winterscape.

It started off with the entrance to a townhouse in Soho of palatial proportions at 214 Lafayette Street, complete with a pool on second floor. The base of this could be spied on from the long entrance, where fit men from Columbia University men’s water polo team were in black speedos, swimming in upwards breaststroke so vigorously that it was not difficult to miss the gold Hickey Freeman signature on their toned derrieres. 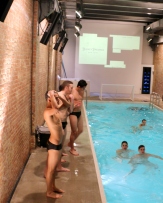 Once upstairs, the collection was split into three color themed areas, complete with a bar in the middle serving cool cocktails and bubbly wine. Starting with The Strand, a sartorial suit collection, it was a Wall Street squad of gentlemen in their renditions of the power suit. These were in greys, blues, light pinstripes and some shimmering forest greens. While not as customized as Suit Supply, these were definitely a staple for the Battery Park and Financial District gentlemen minting the money. And as per creative officer Arnold Brant Silverstone, they were indeed opening up a new store in Brookfield Place to cater to the very crowds.

The white themed section in the back of the library area, complete with a luscious cow print rug, was a more casual weekend afternoon crowd. Called Greenwich, the men wore primarily creams and whites, with a cashmere overcoat, a cotton cashmere country time corduroy suit, a tan jacket and blazer, the former with fur lining, and polo match style plaid pants in light olive tones.

Grey knit snoods and beanies kept the looks casual, as did the clean cream tees and turtlenecks, and the use of moleskin and Vicuna. The most uprising was a pair of cashmere joggers, great for looks but likely not intended for the functionality!

My favorite section was the one by the mahogany and burgundy wood fireplace, with chocolate hued suits in a variety of textures, fabrics and prints. Called Highlands, it was a take on the Scottish countryside, ranging from full on country and hunting men to perfectly seductive black tie and formal dinner gents. Plaids of all sorts dominated the suits, trousers and blazers, in hues from rusty oranges to chocolate browns to tans to forest greens, complemented by leather gloves, wool scarves, walking sticks and country hats. Breathtaking and perfectly wearable to look at, the men may as well have walked out from a land before our current digital time. 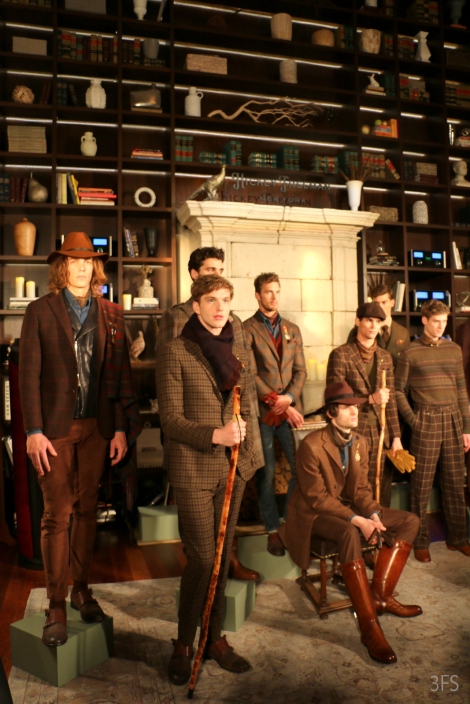 My favorite was one particular look which paired a leather vest with a plaid blazer and a cashmere stole; with a warm hue and gold accents on brooches, it was a Scottish country look made to perfection, and one that I could easily emulate in my own style. 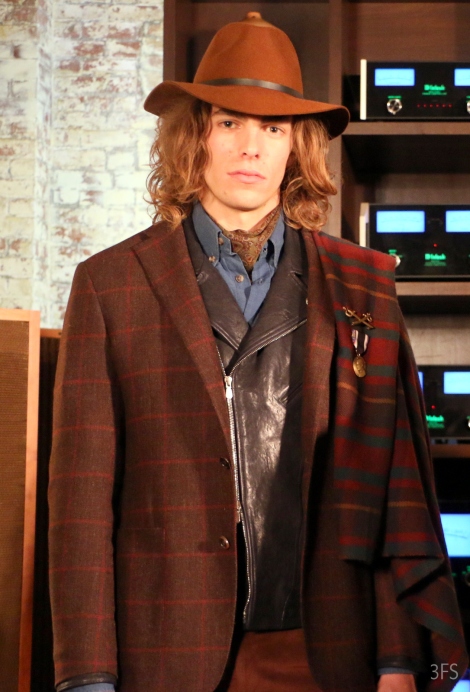 The boots on another gentlemen were enviable, bringing longer boots back from the artistic British era when such things were mainstays on cobblestone streets. 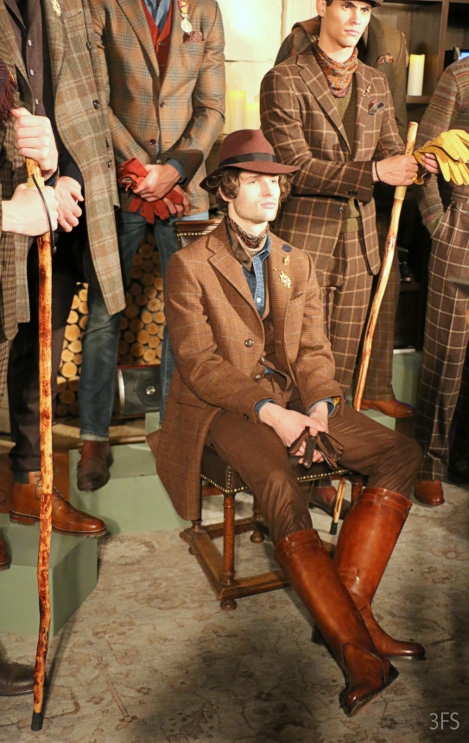 The dinner and black tie collection included paisley printed shimmering jackets and others in lush velvet. Complemented by bowties on white shirts, black satin lapels, or plain black collarless shirts for a more lively look, these were akin the candy on the cake of formal attire. Burgundy, dark violet, dark chocolate and midnight black were the colors that came to mind as I inspected the jackets with enviable scrutiny. I could definitely see those flying in American soirees and events, sending luscious damsels swooning. 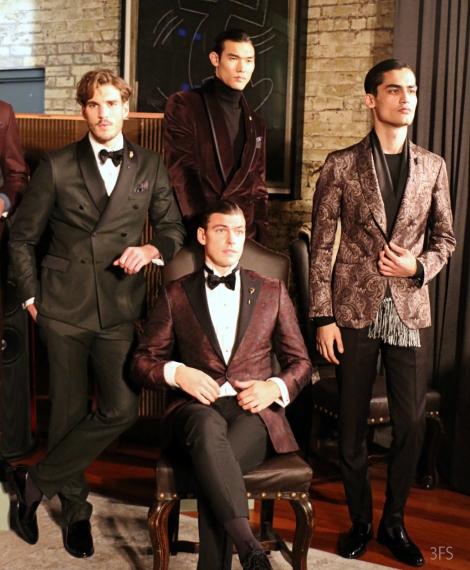 With the only thing standing out of line being the incessant clicks of cellphones, it was a sorrow moment to step out into the real world of the post social media era.
Hats off, literally, to an elegant take on a staple in American fashion.

16 responses to “Investing in Sartorialism: Luxury Menswear by Hickey Freeman at NYFWM”