I am addicted to this thing called life,
And all forms of living it.

Many know that via my travels, I often come across both fashionable fortresses and papparazzi, but somewhere my heart beats strongly for the world of culinary. And my addiction stems from the variety it offers. Some may feel it lies closer to a sugar dissolved dessert, but I truly crave for juxtapositions and differences in this food art. And my quest only reaches a (momentary) destination when I come across a tasting menu.

This one happens to be in Princeton, a noble town of peacocks and prepsters, with a fine art of all things culinary that I have seen before. This time, I opted for Elements, my second restaurant by Scott Anderson after his flavorful Mistral. Known as an inventive and progressive artist, with a James Beard mention in his cap, he believes in foraging, curing, fermenting and transforming classic American dishes into his trademark ‘interpretive-American’ fare. With an uncanny resemblance to my own peculiar tastes in all things whimsical, a tasting menu was a given.

With just nine tables and an open kitchen, I found the service to be impeccable and far superior to cosmopolitan counterparts. With the sun shining in by day, the ambiance transformed into a golden one, which became sultry and vibrant as the night drew in. For the tasting menu did take about 5 hours to inhale, leaving a lifetime of memories with it.

It started with a beautiful branch on a plate, reminding me somewhat of Narnia and the imaginative creatures and their habits. It was in fact a magnolia branch with edible magnolias. Each was folded and stuffed, which we inevitably plucked from its ‘tree’, and nibbled with petals and all. With a vibrant purple Pantone style hue, the inside was green and golden, a coriander and potato chutney with cracky bits that we were left guessing. 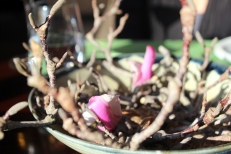 Next, on a delightfully rustic stone plate, was yacon, an Andes root vegetable which looked dry and braised. It tasted much better than its mushroom appearance, especially with a dollop of tangy yacon and apple cider puree.

Probably my favorite in terms of presentation was the grandma’s style cookie box! Many know my infatuation with cookies, and this one looked vintage, with painted peels of Philadelphia and other awe-evoking details.

Inside were a group of shortbread savory cookies (a fantastic concept!) with Parmesan cheese and citrus puree. It was a union of my favorite texture – crumbly, soft and meltable – with a refreshingly salty taste of the cheese. Something I could gobble in gigantic proportions! 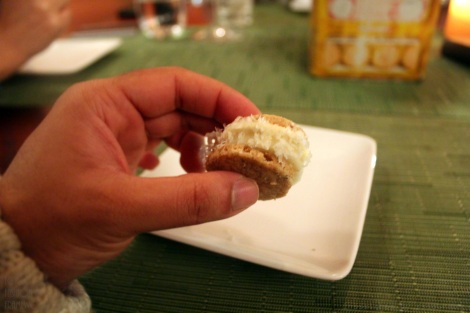 During the meal I realized that sunchokes were as illustrious in cooking as the prefix of their name, and were a chef’s favorite which showed up fairly often. For next was a fried sunchoke with cashew puree and pike rose, modeled to look like a quail egg of sorts, and plated in the most rustic of plating techniques I had seen. On a rocky bed of dry, unpeeled sunchokes, it was like a desert safari, bringing the season and the sentiment to light. The lighter-than-potato taste of the sunchoke was offset well by the heavier cashew, and made for an indulgent bite. 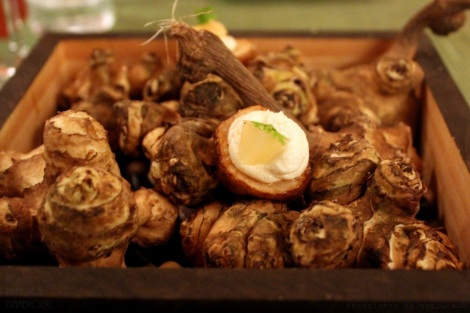 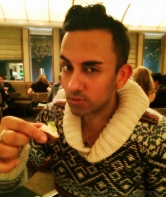 Almost as if playing with our visual senses, the next plate was yet another platter of artistically placed twigs akin to a recent showing I had attended, giving the first impression of a pun on an organic meal. We laughed, and lauded the creativity and whimsy of the chef and staff, who laughed with us! When peering closely, we found fried broccoli tempura, lightly coated and with a dollop of soy sauce. While on the relatively greasier side, the crunch of a vegetable was appreciated. And in all honestly, my visual senses had overpowered all others by this point! 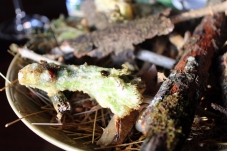 With a marble designed plate, the next dish was a salad made of goat cheese, fried sunchokes, candied pecans, dehydrated beets and pickled apples. With many textures and colors, it was at first busier than previous courses, but made for an exploratory meal. With a punch of salt from the cheese, to a burst of tangy-ness from the beets and apples, to a sugary crackle from the pecans, it was an unpredictable sequence which ended up being collectively delicious.

Moving away from the whimsy (much to my childlike playful dismay), the next plate was nonetheless a craft of art, too. A green salad glowed on the black plate, made of smoked charred cucumber with buttermilk and tomatillo. Overwhelmingly crunch on many levels, it was the first time I had inhaled charred cucumber, and being a fan of all things charred (including ice cream!), I was impressed. It was also probably an indication of why the plate was black. Like an opera in my mouth, it was truly a palette cleanser, a refreshing bite that immediately awakened the taste buds and banished any sign of laziness.

A black stone plate brought out another succulent moonlit looking dish: white asparagus, coriander, quail egg, spiced quinoa. I have come to love white asparagus after my time in Princeton and Holland, as it lends itself well to buttery, juicy accompaniments. With a crunch spiced quinoa which soaked up the quail egg, it was a sumptuous, buttery bite, which retained the textures of its constituents alarmingly well. For who can complain about butter when they are eating asparagus after all?

Accompanying this dish was an inventively plated whole wheat bread in a plate bordered with whole grains, like a piece of art. The chef enjoyed playing with the raw ingredients as an offset and reminder of the origins of his succulent dishes, which worked as a beautiful, simple tactic of plating decor. 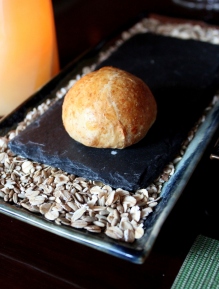 The black plating continued with a Portobello mushroom tartare, which had been cooked like a slab of meat, a technique I’d seen in Princeton itself before. Accompanied by ginger, scallion, seaweeds, truffles and rice crisps, it was a salty and rich dish. I found it to be preparatory for a meal, but not quite fulfilling, owing to the ordinary combination of ingredients, despite all being individually delectable. They say that when you get used to whimsy, the ordinary languishes in comparison, despite being compelling.

With 9 courses done, having lived 9 succulent lives of a feline, it was time for the heartier, and sweeter elements to prevail.

Up next, for the Prince needs resting time too.

12 responses to “The Prince of Princeton, with 19 courses of Edible Art: Part 1”

do you love what you miss, or miss what you love? 🌵 @hotel850svb @sanvicentebungalows #BeverlyHills #WestHollywood #CaliBoy
... of course your opinion matters. just not to me. 🙃 #MoodOfTheDay #PinkWall #WestHollywood
i lead a #victorian life, surrounded by exquisite clutter ♥️♠️ @aliceandolivia #aliceinwonderland #NYFW
you’re a mess... beautiful, yes, but a mess ❤️ @aliceandolivia #nyfw #mood
“don’t worry alice, we‘re all mad in here” ~ #CheshireCat (or maybe a cow 🐮😻) @aliceandolivia #NYFW
brb, gone hunting 🐆🐆🐆 @theblondsny #NYFW #felines #ontheprowl
dreams come true: yesterday i was dreaming of #greekfood and today i am eating it 🇬🇷 @nerainyc #newyork where felines feast on pistachio #baklava 😋
in every library is a single book that can answer the question that burns like fire in the mind 🔥📚👠 @priscavera #runway at the #LIBRARY for #NYFW 🤩🤪
#aries: sweet as sugar, hard as ice 🧊🧊 #SwipeLeft for getting caught #BTS in #SelfieGames 🤳
wild mewwwd @christiancowan 🐆🦒🐅 #NYFW
we are each our own devil, and we make this world hell 🐍 @jonathansimkhai #afterparty #NYFW
live life colorfully 💜 the @empress1908gin cocktail at @havenrooftop brings back memoirs of when i launched the brand with hair to match 😉 #SwipeLeft #BTS #Mixology @sanctuaryhotel #NewYork