The best way to do it is to do it.

Inspirations about active lifestyles and activity are all over the likes of Pinterest and social platforms, with a world constantly telling us to do something, chase our dreams like a marathon, and fulfill ourselves by being fit, alive, moving and relentlessly under-tired.

Which is why it is no surprise that activewear has been a growing trend, and even at New York Fashion Week (NYFW), 4 upcoming brands at Milk by Made showcased activity through different lenses. While some focused on blending it with streetstyle and grunge, others chose to make a statement out of it about our modern lifestyle, social outlooks and responsibilities, and our frivolous decision making economy.

Ground Zero was by Philip and Eri Chu and exhibited one of my favorite themes: bikers. Only this time, to make the guys in the crowds salivate, it was biker babes! With an abundance of graphic prints, wider silhouettes and Eastern motifs, it was a ready-to-wear collection for the rebellious and independent girl. 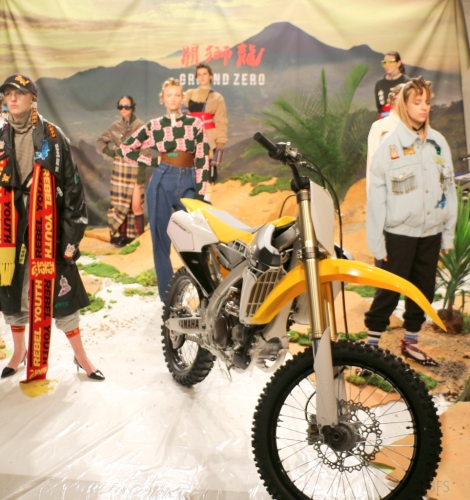 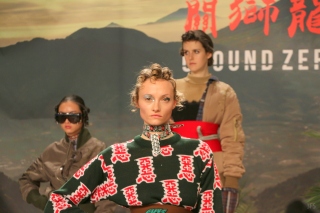 One even claimed it on her sleeve! While others poised in attitude or relevant spunk.

With an inspiration from the 90s, with one model clearly looking Hollywood poster ready, there were sporty cuts and colors juxtaposed with Asian patches and embroidery, making it a cross between streetwear and activewear. With darker hues like red, brown, violet and black, it was up to the accessories and embellishments to make the outfits pop, with fabrics including wools, cottons and stonewashed denim. 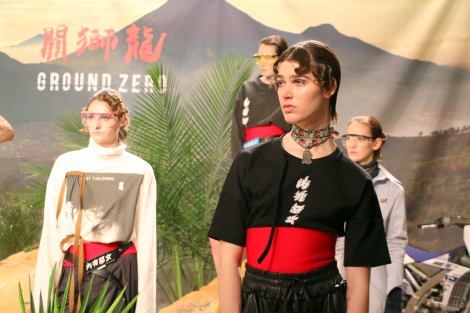 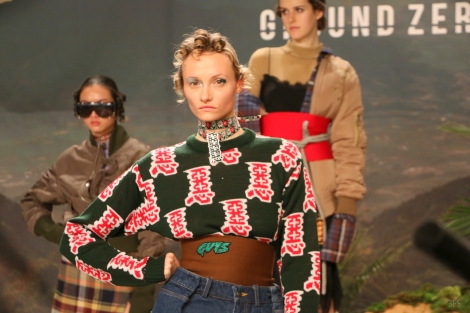 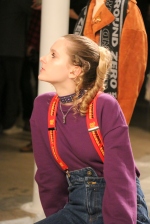 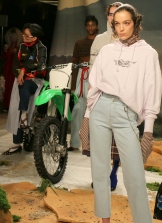 Metal, whether in oversized safety pins on denim blazers, or on eyewear, or simply as neckwear, was also a major theme, tickling my fancy. For many know that since the emergence of studs, I have dedicated my wardrobe to partial metal. 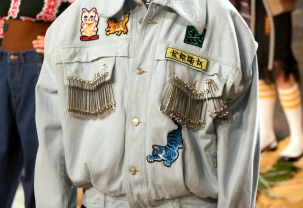 My favorite parts were the accessories. The Hello Kitty motif on yellow eyewear, or the piercings on clear sunglasses, or simply the ballet shoes, were all standouts. Grungy? Perhaps. Disruptive? Definitely. 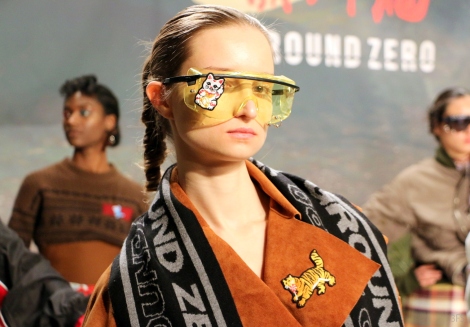 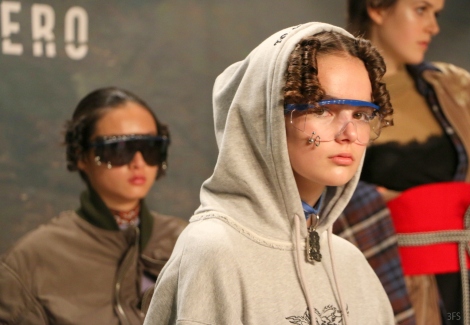 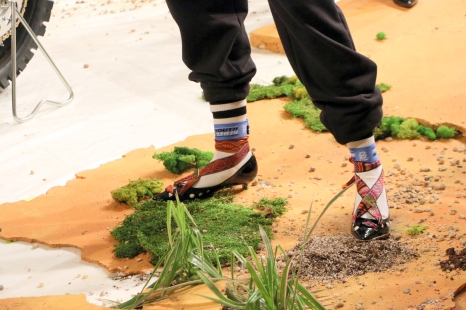 This Is The Uniform

With a unique name, This Is The Uniform was the brainchild of London based Jenna Young who focused on socially conscious designs. Placing a spotlight on consumption, waste and ignorance, the collection called ‘No Frills‘ was meant to aspire and inspire us to live more aware of such things around us. It was no wonder that the brand’s colors were the McDonalds yellow and red, taking inspiration from a familiar, mainstream concept of consumption and applying it to clothing.

With a tangent on the economics of shopping and consumption, the designer was interested in the way people made decisions to consume, and the classic marketing ploy of buying in excess at a supermarket. Banishing the notion sans frills, she made it a metaphor of her outfits. Some evoked basic wear, while others could be interpreted as cheap. It was, ultimately, a sporty, active and working class collection, that proudly made a statement of a chosen lifestyle. 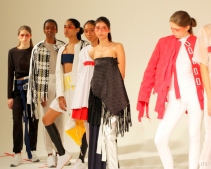 While reds and whites were dominant, the frays and tassels – despite not being as refined as one may anticipate – were also mainstays. Inexpensive jersey cloth, as well as synthetic and plastics were constructed together to call it uniform. And to my surprise, uniform was yet another metaphor for the way people describe and create themselves, without confinement. As such, while the clothing seemed initially jarring, I walked away with a newfound love for social uniforms that can be prevalent every day, anywhere.

Feng Chen Wang brought a highly sporty, interactive, and visually oversized presentation to life. With models in streetwear meets winterwear clothing, from oversized bombers to unzipped jackets and drop crotch pants, complete with sways and cowboy style tassels, it was a scene of unrehearsed chaos. 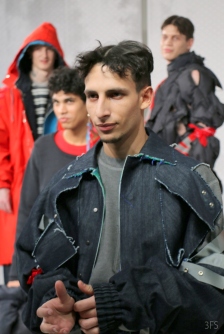 Fitting to the brand, the models goofed around versus smoldering at the cameras, and the whimsy felt natural with the line. While predominantly black in textures of cottons, nylon, canvas and dispersed with patchwork and swaying fabrics, an aqua bomber was a standout. As was the collection of red or aqua accents on jackets in the forms of piping and undershirts. 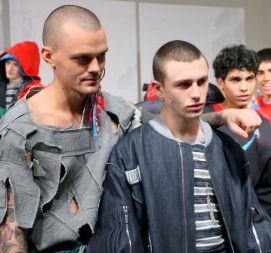 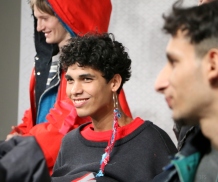 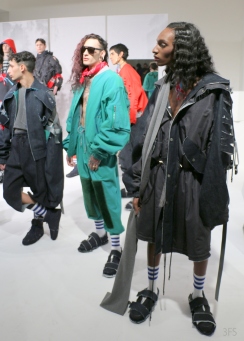 Making a statement towards preserving modern skater and streetstyle, this was a comfortable and lively take on clothing for the active. 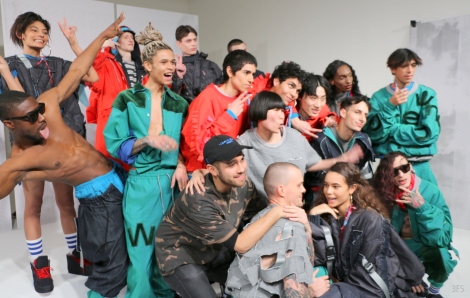 Finally, there was the multi-themed Namilia, based out of New York and by designers Nan Li and Emilia Pfohl, which was a statement on ultra modern culture and the reflection of fashion on the digital, mobile and ‘meme’ filled world. Although many found it a turnoff owing to the hyper sexualization of females in all the 6 lineups, each constituting their own girl gang, I felt it was definitely something a Rihanna or Gaga would endorse, and most certainly made a statement about the inside of our minds (or laptop memory cards). 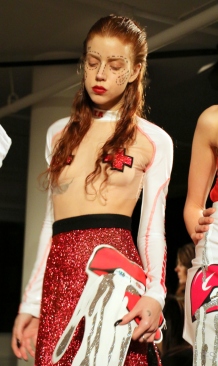 Of the several girl gangs, the most shocking one being ‘Orgasm Clinic’, making a reference to how women are objectified into surgery (based on a model’s face), with shiny depictions of body fluids and a suggestive red, pink and white, flesh and fluid color scheme with a dose of skinshow, sheer and sparkle. 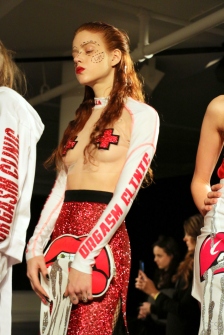 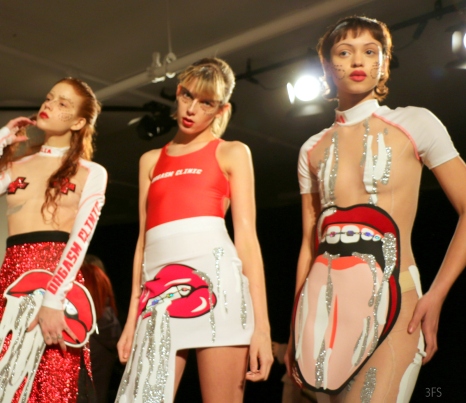 ‘Nude and Rude’ was another gang that was more on the side of intimates and lingerie, complete with sheer gowns and roses made of lace and dispersed in alluring spots. Possibly wearable due to its subdued sexiness, it was nonetheless a depiction of how women are viewed. The standout showstopper in a red body hugging neoprene dress with a rose tailed gown finish was definitely catchy. 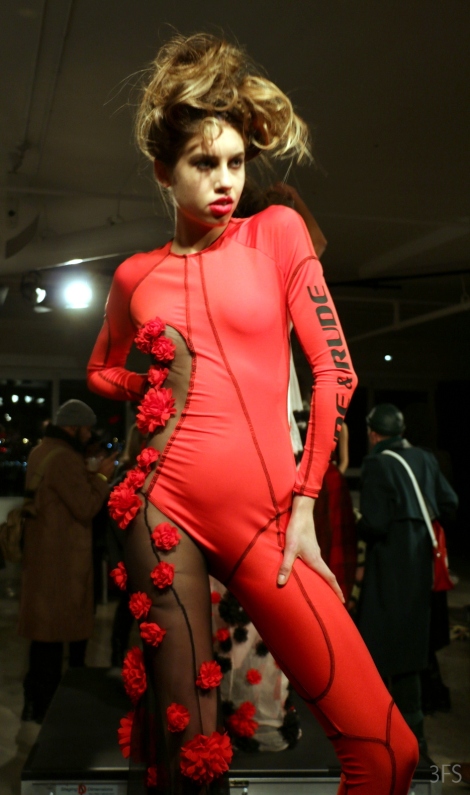 ‘Wet and Wild’ seemed to borrow from the Little Mermaid fantasy, with borderline swimwear themed in pastel hues and shimmering with sequins and seashells. With a bit more tonality, it could have been a water sports line. 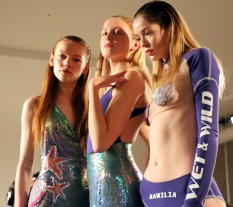 ‘Feel the Heat’ was a take on the gym clad LuluLemons and UnderArmors of the world, seeming more like edgy fitness gear than anything else. In neon colors and black accents, it was reminiscent of other lines. In that sense it was similar to ‘Come and Play’, which barring the suggestiveness of its phrasing, seemed like an extension of an activewear line in darker colors. Both were meant to be darker takes on the overuse of suggestiveness in our pop culture, and by being the very same, they qualified themselves as borderline acceptable. The irony was within itself, and definitely a topic of terrific debate. 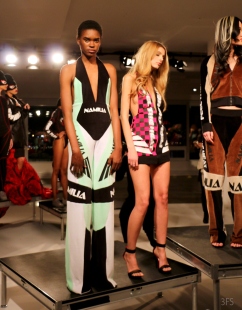 ‘Hush Hush’ was my favorite line due to the presence of leopard print, obviously a favorite. I found the jumpsuits in rainbow hues reminiscent of the 70s, while a two piece and one piece dress paid tribute to the Pantone colors of the year: Rose Quartz (baby pink) and Serenity (baby blue). 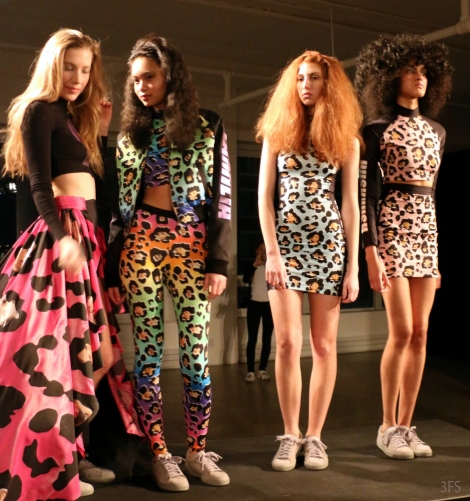 According to the designers, humor was a major part of their message in how they relayed social issues, feminism and the concept of girl power. I enjoyed the whimsical take on feminism versus the serious, oppressive and violent one. 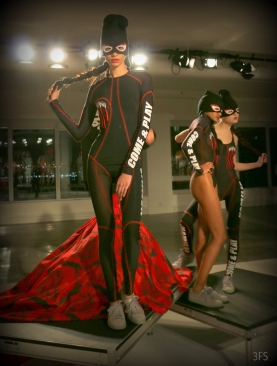 And thus, varying from downright streetstyle to overtly sporty, interlaced with messages or simply made for fun, activewear was a major theme at NYFW, and was a testament to the evident way we live our lives.

21 responses to “Fit, Fashionable and Socially Aware: 4 Designers for Made by Milk at NYFW”